Priyanka Chopra reunited with Nick Jonas and in-laws, Kevin and Denise in London 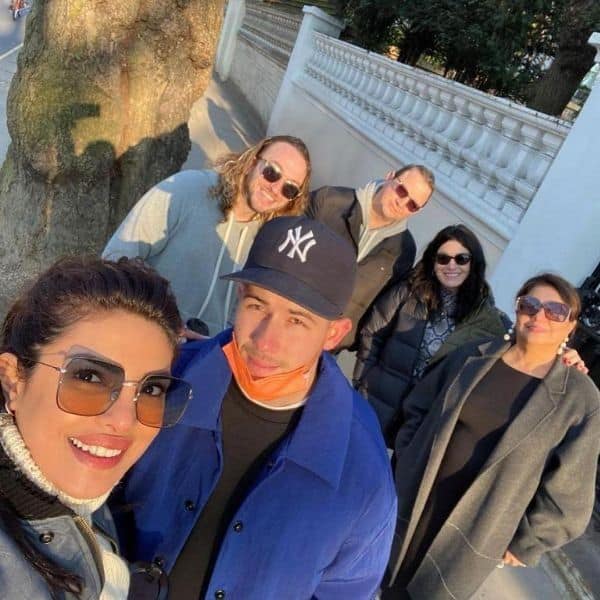 Priyanka Chopra is now in London for the shoot of the Russo Brothers’ Citadel. The lady is finally reunited with her husband, Nick Jonas and in-laws Kevin and Denise Jonas. After wrapping up work on his album, Spaceman he came to London with his parents. Their friend Cavanaugh James has also come along. In the evening, the whole family was taking a stroll in the streets of London. The Quantico actress was wearing an oversized cream-coloured sweater knitted by her mother, Madhu Chopra. She is with her daughter in London. Priyanka Chopra wrote in her caption, “My mother knitted this sweater for me while she’s been here in london. My family is my greatest blessing. So happy to be reunited.”

Singer Jay Sean commented, “Awwww how sweet! enjoy,” while others went gaga over Madhu Chopra and her bond. Priyanka Chopra and her mom are living in London since 2020. She was busy with her film, Text For You, a romantic drama starring Sam Heughan of Outlander fame. But her big project is Citadel, a web series for Amazon being made by the Russo Brothers. It also stars Richard Madden. Priyanka Chopra and Nick Jonas made a pact before their marriage that they did see each other every month no matter where they were shooting.

The two lavished praise on her in an interview to indianexpress.com. They said, “She’s an incredible star. I mean I think she has been amazing. We just had a table read of the show a couple of days ago and it was fantastic. We are so proud of that show. We are excited for audiences to see it. We are just beginning production on it now.” The lady is also busy with her hair care brand, Anomaly and her memoir, Unfinished.

The End of Hydroxychloroquine as a Treatment for COVID-19: Year of Madness Capped by Trial Showing Drug Has No Benefit