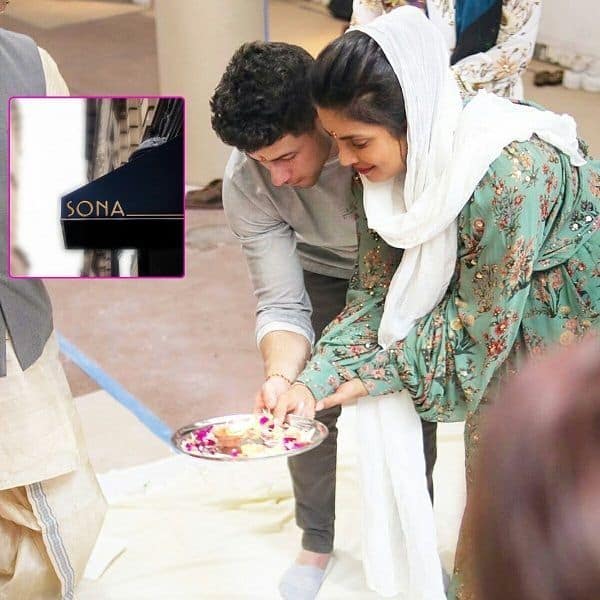 Apart from an actress, a singer, a producer, Priyanka Chopra is also an entrepreneur. And now, the Aitraaz actress has added one more feather to her cap. We all know that Priyanka Chopra is a global icon who is ruling the roost in the west too. She imbibed the western culture, yes, but she has not forgotten her roots. And that’s what she did. She took her roots with her there. For the unversed, Priyanka Chopra has opened an Indian restaurant in New York City. Yes, you read that right. She has named her restaurant Sona. The actress announced the new venture in a heartfelt post.

Priyanka Chopra shared a couple of pictures on her Instagram handle and we also see Nick Jonas. The ‘Disconnected’ singer is seen performing a puja with Priyanka. It is a throwback picture from 2019 when they had bought the space for the restaurant, shared Priyanka. We are so in love with Nick Jonas following every ritual and tradition of Indian so wholeheartedly. The actress captioned the post saying, “I’m thrilled to present to you SONA, a new restaurant in NYC that I poured my love for Indian food into. SONA is the very embodiment of timeless India and the flavours I grew up with. The kitchen is helmed by the incredible Chef @harinayak, a masterful talent, who has created the most delicious and innovative menu, taking you on a food journey through my amazing country. SONA is opening later this month, and I can’t wait to see you there! This endeavour would not have been possible without the leadership of my friends Maneesh Goyal and David Rabin. Thank you to our designer Melissa Bowers and the rest of the team for realizing this vision so clearly. The second and third photos were taken in September 2019 when we performed a small intimate Puja (prayer ceremony) to bless the space that would soon become @sonanewyork Godspeed!” Have a dekko at the post here:

Priyanka Chopra’s friend, Maneesh who helped her open the restaurant heaped praises on The White Tiger actress saying, “First, my kind friend @priyankachopra, who has been the creative force behind SONA. There is no one who better and more boldly personifies “global Indian” than Pri. SONA is so lucky to have her in our corner. From the design, to the menu, to the music, to even the name, Priyanka has her fingerprints all over SONA. Love you dear Pri! Our baby is finally ready for the world to see! We’re about to have a lot of fun. See you all soon on 20th St! @sonanewyork #sonanewyork.”

We are thrilled about your new venture, Priyanka, congratulations.

UFC 259: Israel Adesanya will fight Jan Blachowicz with significant weight difference as Last Stylebender explains why he refuses to pack on muscle