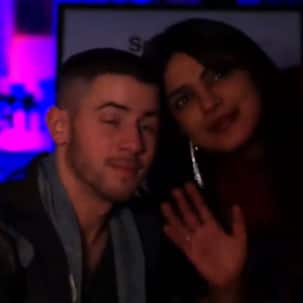 Nick Jonas and Priyanka Chopra are now in London with his parents, and her mom Madhu Chopra. The singer has unveiled the music video of his latest song, Spaceman. In the video, Nick Jonas comes across a man who is away from his loved ones. The singer said that whole concept of isolation is inspired by his love for Priyanka Chopra. He did a live chat with his fans. Priyanka Chopra even interrupted the chat with a kiss. We can see that she is looking radiant in a burgundy dress. The actress has teamed it with long diamond hoops. He told in the live chat, “She is the inspiration to the album and the inspiration to everything in my life.”

At home, the couple got a large dummy of an astronaut installed and posed with it. Priyanka Chopra’s cheeky pic made it look like the dummy had grabbed her a**. She is also a part of the video. She has featured in a couple of music videos of the Jonas Brothers, What A Man Gotta Do and Sucker. The singer has said that the songs are inspired by his love, and the wordings are like love letters.

Nick Jonas told Apple Music, “Most of the songs are pretty much just love letters, which, when I can’t articulate the way I feel with my words with no music, I go to the studio. And I’m grateful to have that because it makes her happy, and that’s most important.”

He further said, “So Spaceman came into my mind because I was thinking, ‘What’s the one thing that all of us have felt during this time?’ It’s just completely disconnected from the world. We’ve gotten so accustomed to looking at a screen instead of human interaction, and I think the thing that keeps us all encouraged and hopeful is just the idea of knowing that there will be a tomorrow when this isn’t our reality, and I think the body of work as a whole tracks that.”

Nick Jonas and Priyanka Chopra will be announcing the official Oscar nominations on Monday.