BTS: Suga gives the cutest expression as his band mates surprise him with a cake on his 27th birthday – watch video 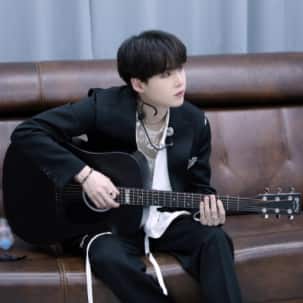 BTS member Suga has turned 27. It is a huge day for the BTS Army that is celebrating his birthday on social media and through various platforms. He also did a VLive with his fans. He said that he knew his band mates well enough to know that they did plan a surprise for him. There is a video where we can see one of them bringing a cake for Suga. The cute expression given by him is sure a steal a million hearts. Min Yoon-gi who is known as Suga is a rapper and producer. He is from Daegu. Min Yoon-gi comes from the town of Daegu and made his debut in 2013 with BTS.

Fans from all over the world have sent him birthday wishes. Donations have been made at various places in his honour. It is a known fact that Suga has spoken about LGBTQ rights and mental health issues.

To my favorite person #Yoongi #SUGA ?

I’ve always admired you for your comforting and splendid music, kind words, intelligence, & everything in you. Thank you for being my serotonin booster?

When BTS surprised Yoongi with a cake having 5 candles in it & asked why 5 candles? & Taehyung just- pic.twitter.com/0HoYeUtssL

We also wish Suga a very happy birthday. Like the ARMY, we too are waiting with excitement for the 63rd Grammy Awards!