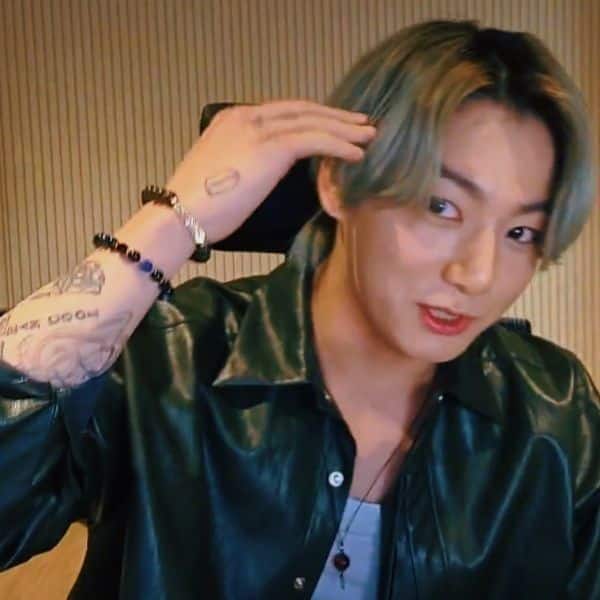 In a live session on Sunday, BTS fans were in for a surprise as Jungkook flaunted his new hair colour and tattoos. He said that the low camera quality is not doing justice to his hair colour. A fan translated Jungkook’s statement which read, “Jungkook said the screen has a filter so the color looks different but originally his hair color is Mint and Chocolate inside so it’s ‘Min-Cho’ color!! He said he’s Min-Cho lover. that’s why..”

Jungkook also sang BTS songs and those of other international artists during the session. A few of the songs he sang were J-Hope’s Blue Side, Jin’s Abyss, Moon, from BTS’s Map of the Soul: 7 albums, Blue & Gray from their latest album BE, and 10000 Hours by Dan + Shay and Justin Bieber.

In a past interview to Weverse Magazine, the singer said that he had a long way to go. He had stated, “There’s a lot I want to do, and a lot I want to achieve. A person who’s crazy awesome in their field. (laughs) Those kinds of people look cool even when they do something different. I still have a long way to go. I feel like I could be more captivating and draw more out of people by improving any number of things, by trying hard to be confident about my singing, or the way I dance and perform.”

Talking about music, he had said, “I must never let it go. That’s what I always think. I have to keep it close to me, even if I get bored, or I don’t want to hear it, or it feels like a hassle. I want to keep on making music. It may be long ways down the road, but I want to prove myself with my music.”