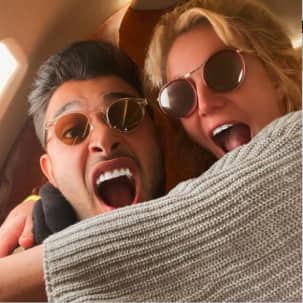 Britney Spears whose life has dominated the headlines in February 2021 due to the conservatorship battle between James Spears and her took to social media to wish Sam Asghari. She has shared a video from her bathroom where we can see her dancing in a bathroom to Toxic. The lady wrote, “Happy birthday to the man that always makes me laugh!!!!! Who did it better ???? @samasghari.” The couple have been together for many years now. Britney Spears is seen without any makeup with her hair in a messy top knot. The song is playing loudly in the backdrop. She has put one more video where we can see Sam Asghari doing the same thing. She asks who did it better.

After the documentary, Framing Britney Spears came out, Sam Asghari wrote, “Now it’s important for people to understand that I have zero respect for someone trying to control our relationship and constantly throwing obstacles in our way. I have always wanted nothing but the best for my better half, and will continue to support her following her dreams and creating the future she wants and deserves.” The two have been together since 2016 when they met on a project.

Though they dated for quite some time, Sam Asghari and Britney Spears kept everything quite normal. Fans adore the two. They made a joint appearance at the premiere of Once Upon A Time In Hollywood. Sam Asghari told a magazine, “It’s so normal, it’s not glamorous or anything… She inspires me in my work and I can give so much to her by going to the gym, by going to work, by having a balanced life. We can get inspired by each other here and there and really grow with each other.”

CDC chief tries to rebuild her agency’s reputation — and morale